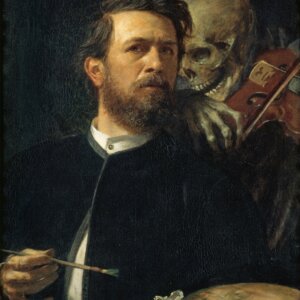 This symbolistic painting is a self-portrait executed in 1872 by the Swiss symbolist artist Arnold Böcklin. He first exhibited at the Kunstverein München in the same year, establishing his reputation in Munich’s artistic community. It is now in the Alte Nationalgalerie in Berlin.

Painted in Munich, the painting depicts a bearded Böcklin stalked by a personification of death playing a single-stringed violin in an intimation of his mortality. Death and mortality are a repeating theme in several of Böcklin’s works, including Plague, two versions of War, and five versions of Isle of the Dead.

According to Alma Mahler, the wife of the composer Gustav Mahler, her husband was “under the spell” of Böcklin’s self-portrait when writing the scherzo movement of his Fourth Symphony. 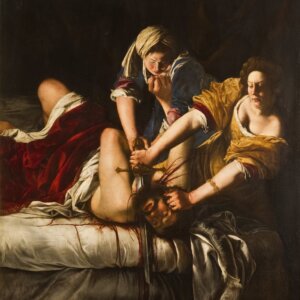 Judith Beheading Holofernes is a baroque-style painting of the biblical episode by Caravaggio, in which the widow Judith stayed with the Assyrian general Holofernes in his tent after a banquet and then decapitated him after he passed out drunk. The exhibition catalog (Skira, 2018, p88) also cites biographer artist Giovanni Baglione’s account that Genoa banker Ottavio Costa commissioned the work.

The deuterocanonical Book of Judith tells how Judith served her people by seducing and pleasuring Holofernes, the Syrian General. Judith gets Holofernes drunk, then seizes her sword and slays him: “Approaching to his bed, she took hold of the hair of his head” (Judith 13:7–8).

Currently located at the Galleria Nazionale d’Arte Antica at Palazzo Barberini, Rome, the artwork is the most pivotal part of the Book of Judith. It depicts a socially liberated woman who punishes masculine wrongdoing.” 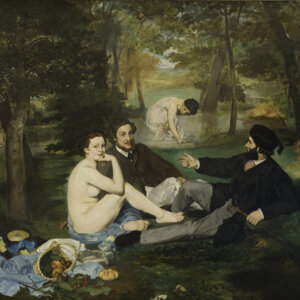 Le Déjeuner sur l'herbe / The Luncheon on the Grass – originally titled Le Bain (The Bath) – is an impressionist oil on canvas painting by Édouard Manet created in 1862 and 1863.

It depicts a female nude and a scantily dressed female bather on a picnic with two fully dressed men in a rural setting. Rejected by the Salon jury of 1863, Manet seized the opportunity to exhibit this and two other paintings in the 1863 Salon des Refusés, where the painting sparked public notoriety and controversy. The artwork broke away from the classical view that art should obey established conventions and sought to achieve timelessness.

The work is now in the Musée d’Orsay in Paris. A smaller, earlier version of the image is currently exposed at the Courtauld Gallery, London. 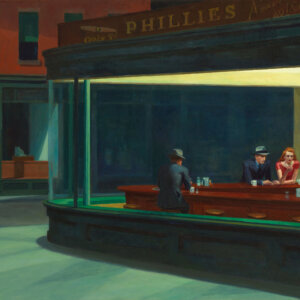 Nighthawks is a 1942 American realism oil on canvas painting by Edward Hopper that portrays four people in a downtown diner late at night as viewed through the diner’s large glass window. The light coming from the restaurant illuminates a darkened and deserted urban streetscape.

It has been described as Hopper’s best-known work and is one of the most recognizable paintings in American art. It is suggested that Hopper was inspired by a short story of Ernest Hemingway’s, either “The Killers” (1927), which Hopper greatly admired, or the more philosophical “A Clean, Well-Lighted Place” (1933).

The scene was supposedly inspired by a diner (since demolished) in Greenwich Village, Hopper’s neighborhood in Manhattan. Hopper said the painting “was suggested by a restaurant on Greenwich Avenue where two streets meet”. Additionally, he noted that “I simplified the scene a great deal and made the restaurant bigger”. 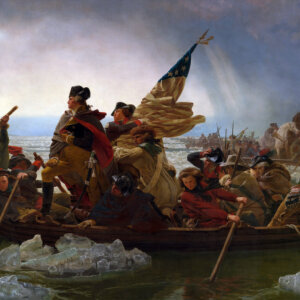 This painting by German-American artist Emanuel Leutze commemorates General George Washington’s crossing of the Delaware River with the Continental Army on December 25–26, 1776, during the American Revolutionary War. That action was the first move in a surprise attack and victory against Hessian forces at the Battle of Trenton in New Jersey on 26 December.

The flag depicted is an early version of the flag of the United States (the “Stars and Stripes”), the design of which did not exist at the time of Washington’s crossing. The flag’s design was first specified on the 14 June 1777, Flag Resolution of the Second Continental Congress. It flew for the first time on 3 September 1777, well after Washington’s crossing in 1776.

The original was part of the collection at the Kunsthalle in Bremen, Germany, and was destroyed in a bombing raid in 1942 during World War II. Leutze painted two more versions, with the smaller version of the two, which was auctioned this year and sold for $43 million. 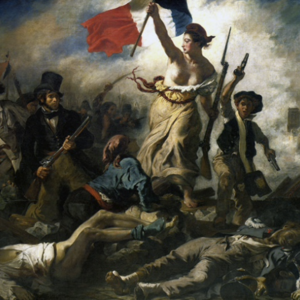 Liberty Leading the People is a painting by Eugène Delacroix honoring the July Revolution of 1830, which toppled King Charles X of France. A woman of the people with a Phrygian cap personifying the concept of Liberty leads a varied group of people forward over a barricade and the bodies of the fallen. She is holding the flag of the French Revolution – the tricolor, which again became France’s national flag after these events – in one hand and wielding a bayonetted musket with the other. The figure of Liberty is also viewed as an emblem of France and the French Republic, known as Marianne. The artwork is sometimes wrongly thought to depict the French Revolution of 1789. Delacroix depicted Liberty as a symbolic goddess figure and a vigorous woman of the people. The mound of corpses, and wreckage acts as a kind of pedestal from which Liberty strides, barefoot and bare-breasted, out of the canvas and into the viewer’s space.

Delacroix painted his work in the autumn of 1830. In a letter to his brother dated 21 October, he wrote: “My bad mood is vanishing thanks to hard work. I’ve embarked on a modern subject—a barricade. And if I haven’t fought for my country at least, I’ll paint for her.” Liberty Leading the People is exhibited in the Louvre in Paris.

Bazille's Studio (L'atelier de Bazille) is an 1870 painting by the French impressionist Frédéric Bazille in collaboration with Édouard Manet. It has been kept at the Musée d’Orsay in Paris since 1986. It shows the artist himself surrounded by his friends in his studio, including the painters Édouard Manet and Pierre-Auguste Renoir.

Bazille shared a studio on the Rue de la Condamine with Renoir from January 1868 to May 1870. The tall Bazille is center stage, holding a palette, having in his own words been “painted in by Manet.” On the right, Edmond Maître, a friend of Bazille, is seated at the piano under a Monet still life. Manet is talking to Bazille and Renoir is seated.

All the wall-mounted pictures surrounding are ones that were rejected at some time by the Salon and for which Bazille is expressing his support. This artwork is currently located at the Musee D’Orsay in Paris, France, and has yet to be appraised. 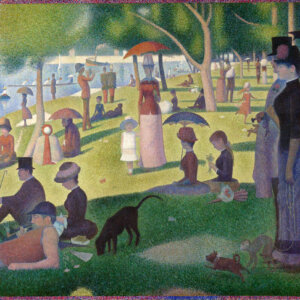 Appraised at $650 million dollars, A Sunday Afternoon on the Island of La Grande Jatte (French: Un dimanche après-midi à l'Île de la Grande Jatte) is Georges Seurat's most famous work. Executed on a large canvas, it is a founding work of the neo-impressionist movement. Seurat’s composition includes several Parisians at a park on the banks of the River Seine. It is in the collection of the Art Institute of Chicago.

Seurat’s painting was a mirror impression of his painting, Bathers at Asnières, completed shortly before, in 1884. Whereas it is doused in light, almost every figure on La Grande Jatte appears to be cast in shadow, under trees, an umbrella, or another person.

In 1923, Frederic Bartlett was appointed trustee of the Art Institute of Chicago. He and his second wife, Helen Birch Bartlett, loaned their collection of French Post-Impressionist and Modernist art to the museum. 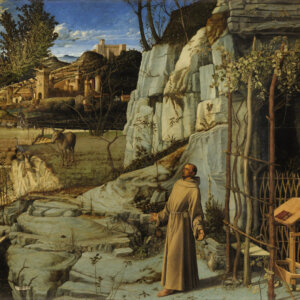 St. Francis in Ecstasy (or St. Francis in the Desert) is a painting by Italian Renaissance master Giovanni Bellini, started in 1475 and completed around 1480. Bellini depicted the religious figure of St. Francis of Assisi in a landscape. The painting portrays Francis of Assisi, the Italian saint of the early 13th century, in an Italian landscape, stepping out in the sun from his cave, his figure anchoring the creamy celadon and golden-green landscape.

Bellini became sophisticated in his painting skill in the fifteenth century, the culmination of which is Saint Francis In Ecstasy. The moment is depicted in the painting is Saint Francis’s stigmatization on the mountain of La Verna. Bellini envisioned the stigmatization as a moment of human transformation into the divine.[7] The sun’s rays shine on St. Francis, symbolizing him as a Seraph-Crucifix in front of the sun, which indicates the suffering image of the Seraphim. 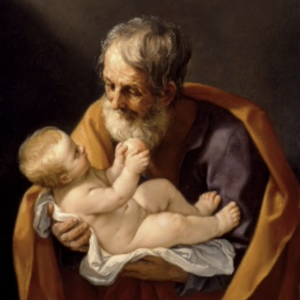 This intimate portrayal of Joseph demonstrates Reni’s skill through his rendering of the foster father of Christ as a simple man tenderly holding his infant son. The fruit held by infant Jesus reminds us of the fall of man in Eden and the fruitfulness of redemption through the advent of Christianity.

He was the most famous Italian painter of his day, revered for the grace and naturalness of his serenely balanced compositions. Even referred to as “the divine Guido.”

Working during the Catholic Counter-Reformation in the seventeenth century, Reni depicted images of saints and holy figures in the humanized and accessible form Catholic leaders required. This intimate portrayal of Joseph demonstrates Reni’s skill through his rendering of the foster father of Christ as a simple man tenderly holding his infant son. 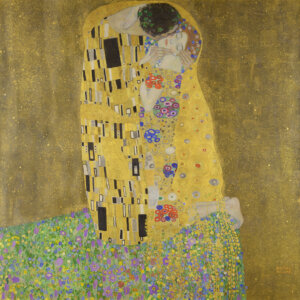 The Kiss (in German Der Kuss) is an oil-on-canvas painting with added gold leaf, silver, and platinum by the Austrian Symbolist painter Gustav Klimt. It was painted between 1907 and 1908, during the height of what scholars call his “Golden Period.” It was exhibited in 1908 under Liebespaar (the lovers), as stated in the exhibition catalog. Love, intimacy, and sexuality are common themes in Gustav Klimt’s works.

The painting depicts a couple embracing each other, their bodies entwined in elaborate, beautiful robes that were decorated in style influenced by the contemporary Art Nouveau style and the organic forms of the earlier Arts and Crafts movement. The painting now hangs in the Österreichische Galerie Belvedere museum in the Belvedere. 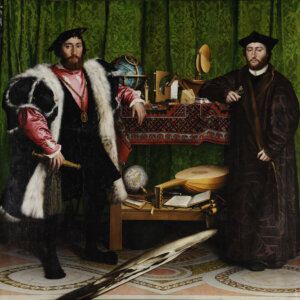 The Ambassadors is an oil on canvas painting of 1533 by Hans Holbein the Younger. Also known as Jean de Dinteville and Georges de Selve, it was created in the Tudor period, in the same year Elizabeth I was born. Speculations would suggest that Elizabeth’s mother, Anne Boleyn, then Queen of England, might have commissioned the painting as a gift for ambassador Jean de Dinteville, who is portrayed on the left in the painting. As well as being a double portrait, the artwork contains a still life of several meticulously rendered objects, the meaning of which is the cause of much debate. It incorporates a much-cited example of anamorphisms in painting. This painting displays the influence Early Netherlandish painting had on Holbein.

The most notable and famous of Holbein’s symbols in his work is the distorted skull placed in the bottom center of the composition. The skull, rendered in anamorphic perspective, another invention of the Early Renaissance, is meant to be a visual puzzle as the viewer must approach the painting from high on the right side or low on the left side to see the form as an accurate rendering of a human skull.

The Ambassadors has rested in London’s National Gallery collection since its purchase in 1890.